This summer I spent some time in London, meeting friends and being cultural. At least a little bit cultural.

To spread that culture I'm writing a quick guide to some London museums seen from my point of view.

Favourite museum of the trip. If you are only going to visit one museum in London, this is it. And while you queue outdoors, check out the figures and windows high up on the building. They are all unique and some of them are quite entertaining (the statues, not the windows).

But the museum itself: Dinosaurs yes, but also so much more. How the human body works. Evolution. Earth quake simulator. Nice restaurant. Blue whale. Cool.

The dinosaur skeleton to the left is what meets you if you enter by the main entrance of the museum, together with some encouragements to donate money. As many other museums in London, admittance is free of charge which almost feels like a steal so donating money or buying guide books is well spent money. To be fair this one skeleton is a replica, since they don't want something bad to happen to the real bones, but that does not really matter. Like many other museums here, if you get really interested, it is actually hard to "complete" the museum in one session so leaving room in a plan for re-visits might be a good choice.

Above is a something that possibly is a human predecessor. At least a very early mammal. Looks like a rat so imagine what rats might be in 100 million years of evolution.

I wish I had had more good images from the museum, but it was either too dark (the dinosaur exhibition) or I was just too interested to spend time on taking pictures. Otherwise you could have seen picture of how evolution had created different beaks (yes, Darwin's classic example) or an image of a blue whale (they are very very big) or a movie from the Kobe Earthquake simulator (I managed to stand without holding on to something but it would have been very scary if it had been real).

I will end with a snapshot from the birth of a new generation of overlords though. 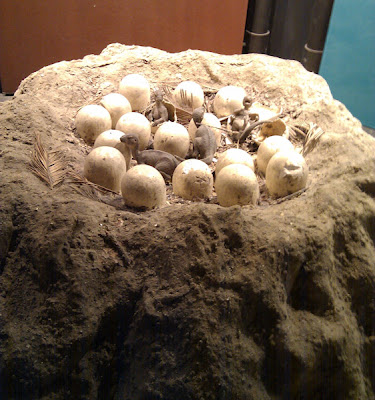 Eggs and newly hatched dinosaurs ready to rule the world (no, the museum is not all dinosaurs, they are maybe 15% of the whole).

A let-down for someone that is interested in science. It mostly manages to make science seem uninteresting (while the Natural History Museum manages to make science interesting). They had a web part in the basement that was a sell-out to Google but people seemed to enjoy it. Space was the most interesting area where you could see some of the items (or replicas thereof) from the space race era. Apollo capsule and moon lander. Some parts of the museums, for instance the plough section, seemed to have been set up 40 years ago and not changes since. 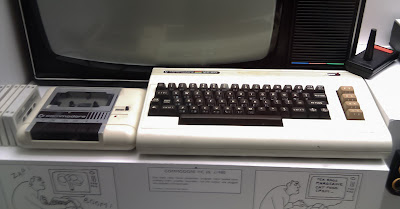 The computer above was a bonus for me though. It is a VIC-20 which was my first computer. When I got it as a birthday present it was second-hand and already obsolete, but was enough to stimulate and fascinate me into a world of high-tech science.

There was an exhibition about Alan Turing who was one of the creators of the computer and one of the brains of Bletchley Park, but I think it would have been more interesting to focus on the work they did than him as a person. All in all, I had the feeling the museum could have been so much better. 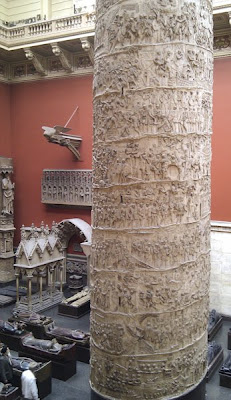 For me the Victoria and Albert Museum (V&A) was a hidden gem. I had seen the name but it wasn't until it was recommended by someone I met while travelling that it really came onto my radar. You might think that this is a museum about Queen Victoria, as I did, but it is not. Rather it is a museum based on her collections, and the collections of more recent royalties. Collections of thousands of art, architecture and random items presented in a very interesting fashion. Such as ”pewter items over time" or ”gem stones” or re-fabrications (old re-fabrications) of some of the most marvellous things found in Egypt or Rome. To the right is a reconstruction of a part of Trajan's column, the original created almost 2000 years ago in Rome. Absolutely the biggest and most massive object in the museum. You can see people in the corner to give some kind of reference.

I would have liked to include photos of the jewellery collection but unfortunately they didn't allow cameras there. To make it slightly more complicated for someone to prepare a theft I guess, or to make people go there to see it for real rather than watching images that cannot replicate the brilliance of real gems.

This museum managed to make collections interesting, something I feel some other museums failed. So if you read this and work for the Science Museum or British Museum, please hire the curators of V&A! 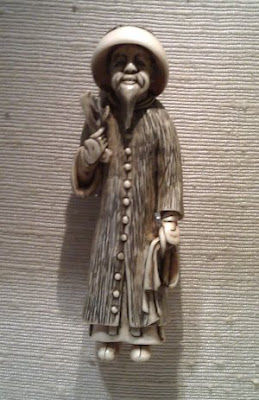 The British Museum is a must-do on a cultural trip to London, but I must admit that I didn't find it as interesting as I had expected. Admittedly I had quite sore tendons after walking a lot and it had been a long day, but I found the museum dull. They claim to have 8 million items but it seems the result is a need to show the most unique items in every era which doesn't always make for the best overall impression. I did see mummies though. They didn't move. One thing I wonder is whether some of the items would not be better off in their original countries. If they cannot be displayed better than this, maybe someone else can do something better.

The figurine to the right is an ivory etching from China. I just found it cute and well made and I'm not aware of any specific cultural significance though it probably wouldn't be on display otherwise.

Tate Modern Gallery had a Damien Hirst exhibition and if you don't know who that is (I didn't before being introduced to him) then he likes to make art out of dead things. Rotten meat showing how it gives life to flies for instance. Yes, real rotten meat and real flies. He also likes to paint coloured dots. All they did for me was to make me think of raster systems for printing but I'm sure not everyone makes that leap of thought, and some might find them interesting. Or at least circular.

Damien Hirst also likes pulling the wings from butterflies, hopefully after killing them, but he seems a bit weird so I wouldn't put money on it. Those wings he then glues to paper forming very beautiful patterns and creations, which people buy for millions of pounds. I wouldn't mind one of the butterfly creations but for me the economic value of them seem a little exaggerated.

His third (and final?) obsession is medicines. Collections of medicine boxes and bottles in cupboards. People in England (at least if they have a science degree or works in a hospital) recognised quite a lot of the medicines but they seem to use different brand names than in Sweden so without that help I would have been all lost. Pills in colourful patterns were at least easier to appreciate. 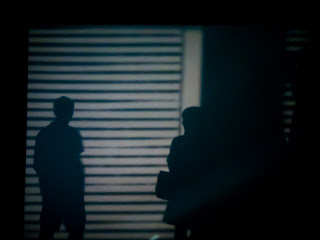 The image to the right is from another part of the gallery where the art is people walking in front of a projector in a dark room. Actually not as quirky as it sounds. It was fun.

They also had an art installation which was a huge (aircraft hangar size) empty room where people were encouraged to move and dance. Some children had fun with it for sure.

The Imperial War Museum has the idea to store and display information about Great Britain's war efforts since 1914, and opened already in 1917. This is just one of 4 branches but it's the root and main one. First, I must admit that it's not for everyone and I didn't manage to lure any of my English friends to this one. It is quite interesting for someone interested in modern history though, and especially war and technological history.

The museum have some classic objects, like the guns in the picture above, a replica of the first atom-bomb (much smaller than I had expected), German V1 and V2 rockets, WWI airplanes, WWII mini submarines and so on, but also several exhibitions and I suspect it's the exhibitions I will remember the longest. There is one "London during the Blitz" exhibition which had a really entertaining (funny - not sure he was meant to be funny but he was) guide and one holocaust exhibition. The holocaust exhibition was unsettling but very good. And they mentioned our Swedish war hero Raoul Wallenberg (we don't have that many being a neutral and slightly ambivalent country during the war).
british museum imperial war museum London museum natural history museum science museum victoria and albert museum
Location: London, Storbritannien

As I upgraded my Kindle, I extracted all the highlights I had done on it. These go from incredulous, to insightful, to funny or only informative. Here they are - and if you wonder why I highlighted anything in particular, just ask. These were collected between 2012 and very recently. They probably say more about me than the ones writing them. Three Men in a Boat ( Jerome K. Jerome ) Monday, 13 August 12 01:22:56 “a general disinclination to work of any kind.” Poirot investigates ( Agatha Christie ) Sunday, 2 September 12 00:16:38 pusillanimous Double Cross ( Ben Macintyre ) Sunday, 16 September 12 08:47:51 Indeed, there was very little work to do, since the Germans believed that “the characteristics of the Portuguese—their love of the melodramatics, their rumour-mongering and their general undependability—made them poorly fitted for the work of agents.” Double Cross ( Ben Macintyre ) Sunday, 16 September 12 09:10:49 asking the Swedish air