How big is Linköping compared to Manhattan?

October 18, 2019
Manhattan is massive in a lot of ways. Massive skyscrapers, a massive throng of people moving around it, but how large is it really to a random Swedish small city, when looking at area alone.

To compare the two areas I went out of the way and created a site that allows you to view two maps side by side, in the exact same scale. This is a little bit harder than it might seem since map services have different resolutions depending on latitude, so everything looks smaller near the equator. It's the old Mercator projection flaw that West Wing made famous.

Realizing that you needed to use different zoom levels at different latitudes was not enough as there is a fixed set of available zoom levels on most (all?) map vendors. Therefore I also had to use fractions of zoom levels, i.e. do a bit of stretching or compressing to match more closely. This did unfortunately result in a bit of fuzziness, but not more than acceptable. 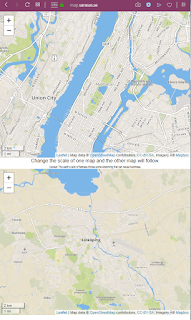 Manhattan is darker gray but it's also rather large. 60 km2 actually, which is clearly larger than the whole city of Linköping, not surprisingly at all. And walking from one end of Linköping to the other represents about the same as walking half the length of Manhattan. In other words, people that walk along all of Manhattan do a lot of walking. 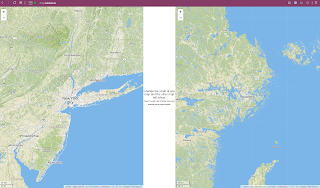 Comparing the east coast of Sweden to the east coast of the USA I also learned that Linköping is the Wilmington of Sweden. Trying to reproduce the trip from New York to Wilmington by starting in Stockholm, going the same direction and distance, will put you in Linköping. Probably much faster and with less queues though. And, as the header suggests, the small town of Västervik in Sweden, matches the American Atlantic City.

The map comparison site is up, at map.sarasas.se so why not give it a go yourself? I'm still adding features to it so it might not look exactly like what you see here but it will be similar.

The site uses mapbox for map rendering, which is only letting a couple of hundred people per month access the maps for free so if it doesn't work, it's been too popular. Please try again next month.

I've now had my cleaner for 3 months and I must say I'm quite satisfied. The amount of cleaning is adequate and so far no real problems. It's not that the skill is very high but I have to give very high points for persistence. Hour and hours of chasing bread crumbs and the skill level doesn't matter so much. So I should present him. Or it. It's an iRobot Roomba , a robot cleaner. I have been forced to make some alterations for it. The rag rug you see on the movie had to go as well as some others. It isn't that it can't handle them, it's that the rugs will not stay at the same place and end up in a pile in a corner together with the dust. I also had to remove some cords (for my benefit as well as the cleaners) and block of my thick living room carpet with one of the virtual walls. It wasn't that it could clean the carpet, rather the opposite. After emptying the cleaner bin a number of times I started to wonder how much of that carpet would remain